It took only nine months to progress from a blank page to the first public flight of the UAS100 prototype, Thales's long-range drone. The backdrop to this success is above all a human adventure and an alliance of the best skills.

This human adventure is perfectly illustrated by the close-knit team formed by Thales and Issoire Aviation, an SME specializing in composite, metal and hybrid structural assemblies for the aeronautics industry, based in Issoire, central France.

Complementarity and close cooperation for success

On October 8, 2021, a new demonstration flight was held in the presence of the press on the Issoire Aviation site. The team gathered that day is emblematic of the complementary expertise and innovation capacity of the two companies. What stands out is the enthusiasm and passion shared by the ten or so people present. Starting with those who are at the origin of the project: Philippe Moniot and Marc Duval-Destin. Leaning over the prototype, they discuss its improvement with as much enthusiasm as one would lend to two youthful start-uppers. However, these two are not at their first try.

Philippe Moniot, who heads up Issoire Aviation, has in the past designed with his teams the first certified all-carbon aircraft in the world and he does not intend to stop there! His passion for aviation is contagious and his leitmotiv is to transmit. Marc Duval-Destin is a jack-of-all-trades when it comes to innovation: automotive, military, aeronautics, from the city car that consumes 2 litres per 100 km to drones, he never stops trying to transform breakthrough ideas into product success.

Together they kicked off the UAS100 project in September 2020. From a blank page, the team had to design a drone weighing less than 100kg, capable of flying more than 100km and operating safely at low altitude in general air traffic.

Led by Emmanuel Guyonnet, director of Drone Programmes within Thales's Avionics business, and Romain Klur, head of the Issoire Aviation design office, some 50 people were mobilized throughout the various phases of the project. Drawing on Issoire Aviation's aeronautical design expertise and Thales's mastery of certified avionics solutions, they succeeded in designing an innovative and naturally safe drone system, and in flying a first prototype of the avionics system in February. The fuselage and avionics were then assembled for flight tests in May and a first public flight in June. Since then, the flights have followed one another to further improve the design of the prototype and to gather the needs of potential customers. The programme for the coming months and years is just as busy, with the aim of entering service in 2023.

A secure solution for a fast-expanding market

Beyond the technical success, the team's palpable pride is further reinforced by the idea of contributing to writing a new page in the history of drones and aviation.

From the surveillance of sensitive areas or infrastructures, to the detection of risks - fires, threats... - through the search for victims, the possible fields of application of the UAS100 are numerous. Customers who came to see the prototype drone were not mistaken, the potential is huge.

Tens of thousands of long-range drones are expected to enter the airspace over the next ten years. For this emerging market to reach maturity, however, we need to be able to offer air authorities a "certifiable" solution. And this is precisely what the alliance between Thales and Issoire Aviation is capable of delivering, combining proven avionics solutions with the lightness and compactness required by a light UAV, and making the most of a well-controlled carbon industry that is a source of aeronautical innovation.

Finally, this market is an opportunity to structure an industrial sector, which Thales intends to help foster through partnerships with various players, of which Issoire Aviation is one of the key figures.

A consortium led by Thales and CS GROUP has been notified by the French defence procurement agency (DGA) to develop and deliver the PARADE drone... 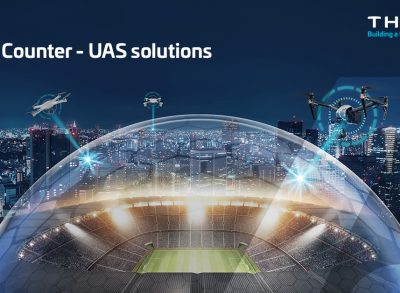 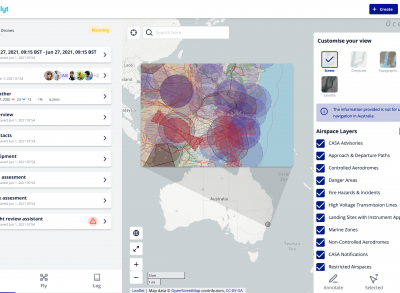