The Tornado platform is due to go out of service in 2019 but Thales has recently connected the simulators at both stations to enable joint training across the bases. This work has been carried out by Thales on a self-funded basis as a capability demonstrator given the value placed on collective training by the RAF, the highly competitive technological expertise of the UK’s foremost simulation capability based at Thales in Crawley, and as a thank you to our customers at both bases after many years of working together.

“The two simulators at RAF Lossiemouth are already connected together utilising local area network, allowing a pilot and his wingman to fly the same mission at the same time. Thales has taken another step forward by securely linking in the simulator at Marham utilising Wide Area Classified Network over commercial leased line, proving its capability in management of legacy and new architectural design to meet future operational needs. This capability echoes real-life missions, where aircraft working together may be deployed from different airbases”, explains Amit Talati, Head of Technical and Product Line Management for the Thales’s Training and Simulation activities in Crawley.

“The instructors who plan, record and evaluate each mission can introduce a wide range of scenarios from the air-to-air refuelling of multiple aircraft, to flying in formation at night, with the addition of hundreds of synthetically generated Air, Land and Maritime intelligent threats if desired”.

Thales has supported the RAF with fast-jet training capability since 1999 at its bases in Lossiemouth and Marham for Tornado GR4, as well as providing engineering support to Typhoon at RAF Coningsby and RAF Lossiemouth. So far, Thales has supported the RAF by flying over 38,000 simulator sorties, accumulated over 57,000 simulator flying hours, trained over 600 pilots, supported major training exercises, prepared aircrew for deployment and delivered over 75 simulator updates to remain current with aircraft developments and operational requirements.

“We’ve been manufacturing flight simulators for decades and the latest models are extremely capable,” says David Bolsover, Thales’s Head of UK Military Training Services. “Once you’re strapped in and the canopy closes, you’re in a real aircraft. Everything: the controls, the sounds, what you see out of the window, the kick in the back when you engage the reheat, G-forces, aerobatics – it’s all there, and fully real. Full mission simulators play a huge part in helping the pilots and weapons system officers to train for every eventuality. The aim is to spend the same amount of time in a simulator as they do in live flights. And not in isolation but in full, multi-aircraft combat missions. We stretch their skills on the ground to make them supremely capable in the air”.

But there is a lot more to the training than just teaching a pilot to control the aircraft. A greater challenge is operating with other aircraft in formation, at night and in all weathers.
“We can also simulate ‘Link 16’, which is a military tactical data exchange network used by NATO and the P8 Poseidon, which allows aircraft as well as ships and ground forces to exchange their tactical picture in near-real time,” says Bolsover.

“Ultimately, we’ll be able to link simulators in various NATO countries to train in extremely realistic, large-scale, multinational missions in complete safety and at minimal cost. There are some national sensitivities and security concerns that need to be overcome before we do that but we’ve got the technology and skills to do it. I’m confident that we are ready for the future.” 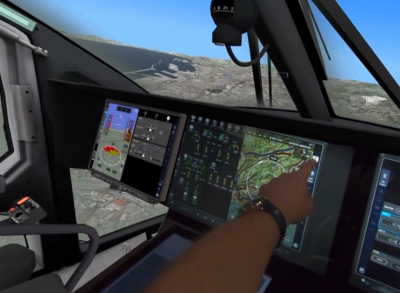 In the presence of the Director General of the Nigerian Civil Aviation Authority (NCAA), Cpt. Musa S. Nuhu and Mr Franck Riester, French Minister Delegate in... 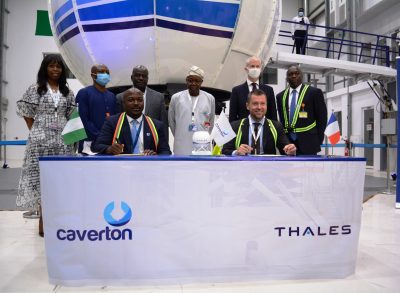