Thales building its factory of the future in the Bordeaux region

Thales building its factory of the future in the Bordeaux region

Regularly ranked among the three most popular regions in France, Aquitaine has been synonymous with aeronautics since the birth of aviation. It therefore made perfect sense when Thales announced its decision to build a new industrial campus in Mérignac, near Bordeaux.

The foundations are currently being laid for Thales’s new facility which is to be located close to Bordeaux-Mérignac airport. The industrial campus aims to be, above all, an innovative and welcoming site, applying strategic ideas about future workspaces in France.

Thales has been present in the Bordeaux region since 1975 and is a frontline player in the regional aeronautics sector, gaining a position as one of the biggest local employers. The Group has developed world-class skills in the domains of embedded aeronautics, including cockpit systems, flight management systems, airborne radars, unmanned vehicle systems, and maintenance, support and innovative services.

A combination of aeronautics and innovation

In April 2013, the Group confirmed its decision to invest 200 million euros in the Bordeaux-Mérignac airport area, also known as Aéroparc (see below), with the creation of an ultramodern industrial campus, aimed at welcoming by 2016 the totality of the 2,300-strong workforce across its two current facilities in nearby Le Haillan and Pessac. The name of this new site, called Air’Innov, illustrates the combination of aeronautics and innovation. Air qualifies the field in which Thales operates and Innov symbolizes the nature of the activities which will go on there and is the hallmark of the future industrial campus. Air’Innov, aspires to be symbolic of Thales’s growth strategy which aims at improving its competitiveness while enriching the working environment of employees and by contributing to the development of the local ecosystem.

Thanks to this strategic location, the Group will benefit from the proximity of major customers such as Dassault Aviation, Sabena Technics, Airbus Defence and Space, the French Air Force, the SIMMAD (Structure Intégrée de Maintien en condition opérationnelle des Matériels Aéronautiques de la Défense), and by getting closer to its main suppliers. It will also enable the development of projects with Bordeaux University and the Aerospace Valley within the framework of an action plan to support regional sub-contractors and local partners.

AEROPARC: MODELED ON US CONCEPTS

The Aquitaine region has been a major player in the French aeronautical landscape since the beginning of the 20th century. The First World War had a considerable impact on the development of the aeronautical sector, further to the transfer of industries in the region. Between the wars, companies from the civil and military sectors continued to settle there. Bordeaux was the first French city to value this duality. The arrival of Thales and Dassault strengthened this identity. Today, the aeronautics sector accounts for 15,000 direct jobs in the Bordeaux metropolis and more than 45,000 in the Aquitaine region.

Beyond aeronautics, the whole economic area of Aquitaine is rapidly growing today. The region, known around the world for its wines, is also considered as being very active in the sectors of medical science, lasers and optical technologies and. There are a number of schools and famous universities. Often mentioned among the top three of regions where it is good to live in France, Aquitaine is continually preparing the future: whereas Thales is conceiving its new cockpit technologies, the all-electrical aircraft has already made its first flight from Bordeaux-Mérignac airport and the factory for this future aircraft will be built near the runway. And it must not be forgotten that within two years, the high-speed railway network will make it possible to travel between Bordeaux and Paris in just two hours! Aéroparc: a science and industrial park which strengthens the identity of Bordeaux as a technological metropolis, particularly across the Aerospace and Defence sectors.

I-SWARM: AN EXPERIMENTAL LABORATORY TO BETTER WORK TOGETHER

A brand new experimental laboratory created at the current Thales site in Le Haillan is part of the strategic thinking related to “the factory of the future”. Supported by regional authorities, I-Swarm (Innovation Software Welfare Agility Responsibility Modularity) gives an insight into the new concepts of space planning that could be implemented at Air’Innov. Thierry Lejeune, the person in charge of the man-machine interface software department of the Cockpit centre of competence at Thales, shares his views with us.

Why this type of laboratory?

This laboratory aims at testing new working tools and methods. I-Swarm was launched end 2014 and concerns around 100 people of the software development domain. Today, nothing is developed alone or even in twos in an individual office. Work has become collaborative. The working environment needs to be adapted and varied to gain collective effectiveness and to stimulate new competitive axes.

This experimental laboratory is part of a regional project, involving regional partners who proposed solutions and know-how in order to create the best adapted working areas and foster communication between teams.

Who are these local partners?

Felix + Associés worked on space planning to favor innovation and creativity, to bring teams together and to install a job-related identity while taking into account our product policy.

How can you measure the impact of these proposed solutions on ways of working together more effectively?

Two studies conducted in parallel on complementary themes will provide a means of evaluating the relevance of the proposed solutions. The first will be conducted in collaboration with the laboratory of Psychology, Health and Quality of life of Bordeaux University to measure the impact of these new spaces and the reorganization of work on attitudes and the behavior of the employees. The second study conducted by the companies IdB Acoustique and GIE-QUALITE/Démarche Prévence will serve to identify the best adapted acoustic and ergonomic solutions.

The studies will be fundamental for the future site. Indeed, the concepts developed and tested in I-Swarm, will enable us, over the next two years, to establish recommendations which can be applied to Air’Innov. “I am very happy to monitor everything that Thales generates for itself and with fellow industry players throughout the region,” stated Alain Rousset, Chairman of the Aquitaine Regional Council during his visit of the I-Swarm laboratory on January 9th, before adding “the region is delighted to be supporting such a project around multidisciplinary teams. Competitiveness will stem from productivity and can be conducive to quality working conditions."

#Air'Innov #Bordeaux #factory of the future

Where all of Thales's aerospace expertise comes together

It's been almost a year since the new site opened its doors — and people love it! They're getting used to the new working methods and have been quick to... 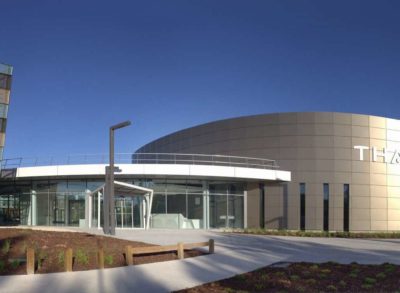 Thales and the regional education authorities in Bordeaux have agreed to work together to provide better information to staff and students and offer more... 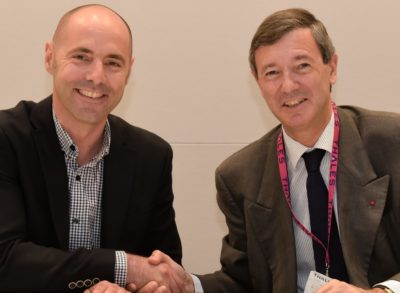 Up close and personal at the new Thales Campus in Bordeaux

Six months after the new facility opened, Dominique Martin, director of transformation for the Thales Campus in Bordeaux, tells us how customers and staff are...